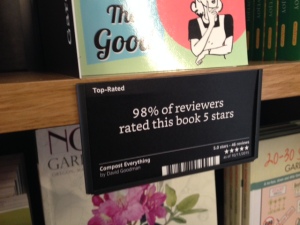 Today, I paid a visit to the newly-opened “Amazon Books” store here in Seattle. For everyone who isn’t familiar with the venture, chances are you weren’t anywhere near the internet the week of November 6th, 2015— because it went bananas over the tech giant’s decision to open a physical store.

Initially, I’d regarded the University District placement of this store with deep unease, as college bookstores are some of the last bastions in profitable independent booksellers. I worried for the shop-owners in the district who had long-procured books for curious minds on and around campus. And surely, the romantic vision of bookstores and their place in higher learning isn’t advanced by a cold corporation like Amazon.

But before I offered the doomsday predictions others had (Huffington Post’s clickbait declared that Amazon clearly saw “nothing as sacred” in opening the shop), I wanted to see it for myself. I wasn’t going to be easy to win over, given my affection for used books, searching for dusty volumes stacked in quiet nooks. I parked the car in University Village’s maze, remembering that a venture like this isn’t targeted toward a used bookshop aficionado like me— and walked up to the unremarkable exterior of Amazon Books.

As others have noted, the shop isn’t much to look at, outside or in— but that’s also not really the point. Some have said you can see Amazon’s lack of brick-and-mortar experience showing in the spare decor. But, perhaps as bookstores go, aesthetics take a back seat— if they were everything, there’s a chance the slick Barnes and Noble concept would still be thriving. My guess is it’s contrast that begs the aesthetic criticism— the University Village shopping center is an overly-designed, Yuppie-Hipster paradise— many of the shops within are far more pretty than useful, and Amazon Books’ utilitarian nature might not prove so unseemly if located elsewhere.

Some have been critical of the flow, the ins and outs of the shelves and tables— I am not a customer flow expert and don’t purport to be one— I’ll only say the used bookstores I frequent are disorganized to the point of being nearly dangerous, with ceiling-high stacks of books that lean and loom threateningly above one’s head. So I’m not sure customer flow is going to be the shop’s undoing. In fact, its complete lack of organization is almost seductive— shelf sections are headed “Wedding Planning,” then right next to it— inexplicably— “If Robots Ruled the World” (as if these are even remotely similar organizing principles). On the shelves themselves, which are not arranged by anything as pedantic as author’s last name, a pop-non-fiction book by Brene Brown can be sitting next to a decades-long, scholarly treatise about rape on campuses. And that’s the allure of it— you feel you’re picking through something a slightly nutty person might have arranged— not an orderly librarian or a scholar, but a real person with a disjointed and disorganized mind like the rest of us. There’s a charm to that, until you remember that a robot algorithm actually curated all of this— but then again, that robot made choices based on the haphazard choices of millions of everyday people.

As I browsed, I set my jaw against purchasing anything, on principle (I didn’t want to abandon my love for independent bookstores). I attempted to stay focused on my key question— what do customers in the store actually get out of Amazon Books?

To answer this, picture in your mind a familiar sight at any bookstore: the bargain book table or shelf. You can’t resist a deal, so you sidle up next to the display and begin to survey the titles. If they are on a table, you might fan out the covers to make sure you can see all of them, searching for a good find. But that creeping doubt is in the back of your mind: are these books actually ANY good? If so, how did they end up in the bargain bin? A mitigating thought enters your mind— bookstores order hundreds and hundreds of copies of books and sometimes can’t sell through an order, so of course there’s nothing wrong with these books. Or IS THERE? After all, nobody else wanted them…

Shopping at a charming used bookstore contains all the drama of a bargain bin that has been rifled through, haphazardly at that— for all you know, they might be books that left the shelves of people in indifference or ignominy, tossed into a box without a thought. One man’s trash might be another’s treasure, or if you’re feeling even more confident in your luck— one man’s treasure, passed on, is another man’s treasure. Ultimately, it’s a crapshoot— but if an error is made in a used bookshop at a bargain table, and a bad book is purchased, it’s the $2 variety of error. Easy to recover from, no regrets. Shopping at a bookstore that offers NEW books can contain some of the same confusion, and with a higher risk of failure given the higher pricepoint— if an error is made there, it can cost upwards of $30.

In this extended metaphor, Amazon Books is like a bargain bin that is full of (new) books other people absolutely loved, operating as if the other readers are actually standing by the bin, recommending the books full-throatedly. There is a practical chorus of affirmation around you— cards above or below each book sing its praises in the form of 4-starred reviews and glowing paragraphs. “That’s a good choice!!” the reviews seem say as you reach for a title. If you put it down to reach for another, “Excellent choice, again!” the shelf-readers exclaim. Not just in the reviews—but everywhere, the reinforcing message is that mistakes just are unlikely, if not impossible. Numerous pricing signs remind you that you don’t pay a cent more than the online price— the same seductive Amazon.com ‘discounts’ means errors aren’t deemed that costly. Added up, the entire shopping experience seems to reinforce that ‘mistakes be damned’! Amazon Books offers all the acuteness, clarity, and discount of an online book purchase, with the added experience of “browsing”.

What does Amazon Books offer customers? If you ask me, the bottom line is that it gives browsers at a bookstore something they haven’t had before— total confidence. The sureness that the selection has already been heartily vetted, thoroughly curated, and reduced in price— promising zero disappointments. It offers customers all the self-actualization associated with browsing (being discerning, intelligent, and worldly), with the security blanket that whatever is chosen will be successful in a near-bulletproof way. The shop is a testament to the power of affirmation, as the customer experience essentially boils down to that: validation— “you can’t go wrong!”— “you’re a smart guy!”— “good choice!”.

Even though I have a penchant for independent, used bookstores, my penchant toward books of any kind is even greater. While browsing, I tentatively picked up a book to read the table of contents. And out of the corner of my eye, I spotted a book that struck me— jarred a memory. I’d seen a play years ago that I loved, but I’d somehow forgotten the name of the author, leaving me unable to investigate her works further. But now, there was that name in black and white— and my memory was jogged. I was moved to grab the book from the shelf, lest I lose the thread again.

And then I thought, defeatedly: “shit, you can’t buy a book from Amazon Books”— but my less rational (and less principled) side won out. I moved to the register and paid, guiltily feeling I’d sold out the independent booksellers I was so concerned about earlier. Knowing that I’d given Amazon Books exactly what they were hoping for, a purchase to add to their massive databank, to help them optimize their experience.

“Did you find what you were looking for?” the lady at the register had asked me. This is no doubt what Amazon Books wants to hear— did I navigate to a purchase easily? “Yes,” was all I said in reply, thinking that didn’t even begin to cover the half of what had transpired to incite my book purchase.

As I left, I realized they’d only earned my purchase because the book was sitting there, face-out,  and served to drum up a latent memory of mine. And I realized that all the algorithms in the world can’t tell Amazon why I picked up the final book I selected. They can’t know that during a leisurely trip— I stopped into a tiny theater in Wellfleet, Massachusetts, on a whim— and saw a local troupe perform Marina Keegan’s little-known play, “The Utility Monster,” in tribute to her passing. They’d never know that I’d often talked of that play to others, recounting its lessons, but was frustrated because my memory failed to recall who wrote it. They couldn’t know that because I had been moved by that stirring experience, I bought a volume of her works in their store (that incidentally does not include that play). Despite knowing seemingly everything, Amazon Books could never know THAT— the “why” of my purchase was locked up in my brain— and I wouldn’t share it with them.

Is there an algorithm for something as personal and protected as the reasons WHY we read what we read? Is there any way for a company like Amazon Books to understand something like the intimacy of how a writer reaches through the page and grips the reader? What do they know, and what can they never know, despite having all the data in the world and the ability to optimize it? They might know the relationship between purchased items, but can they know the relationships between reader and writer? Can data alone be enough to run a successful physical bookstore, which is made up of a personal morass of complexity in the WHY beyond the WHAT? I suppose we will find out in time.

In the meantime, I felt pretty affirmed in my purchase— not because of any shelf-hanger proclaiming 4-star reviews the book received from others, but because I had known for a long time that this author had more wisdom to share with me.